A multinational team of experts led by Bat Conservation International (BCI), Rwanda Development Board (RDB) and the Rwanda Wildlife Conservation Association (RWCA) has rediscovered Hill’s horseshoe bat (Rhinolophus hilli), a critically endangered species not seen in forty years. To support wider efforts to understand and protect R. hilli and other imperiled bats, the team has simultaneously published their findings about the rediscovery and BCI's first dataset shared through GBIF.

“Going into this project we feared the species may have already gone extinct. Rediscovering Hill’s horseshoe bat was incredible—it’s astonishing to think that we’re the first people to see this bat in so long," said Dr. Jon Flanders, BCI’s director of endangered species interventions. “Now our real work begins to figure out how to protect this species long into the future.”

The rediscovery marked the culmination of survey efforts started in 2013, with the team’s persistence paying off during a ten-day and -night expedition to Nyungwe National Park in January 2019. “We knew immediately that the bat we had captured was unusual and remarkable," recalled Dr. Winifred Frick, chief scientist at BCI. "The facial features were exaggerated to the point of comical. Horseshoe bats are easily distinguishable from other bats by characteristic horseshoe shape and specialized skin flaps on their noses."

BCI has published records from the 2019 survey along with others collected during nine years of project field work. Other notable highlights in the dataset include the first record of Lander's horseshoe bat (Rhinolophus landeri) in Nyungwe and the first known occurrences of the Damara woolly bat (Kerivoula argentata) in Rwanda.

The research team has released the dataset alongside a preprint describing the findings and survey methods currently in review with Biodiversity Data Journal. Sharing such data, even for such a rare species, allows the international scientific community to put it to use immediately and aid conservation and research aimed at documenting and protecting African bat diversity.

“Sharing the survey data to be accessible freely through GBIF is as important to bat conservation as the actual findings,” said Dr. Frick. “These data belong to anyone and everyone working to ensure these species have protected forests to call home. Open data sharing ensures we live up to the promise that conservation benefits us all.” 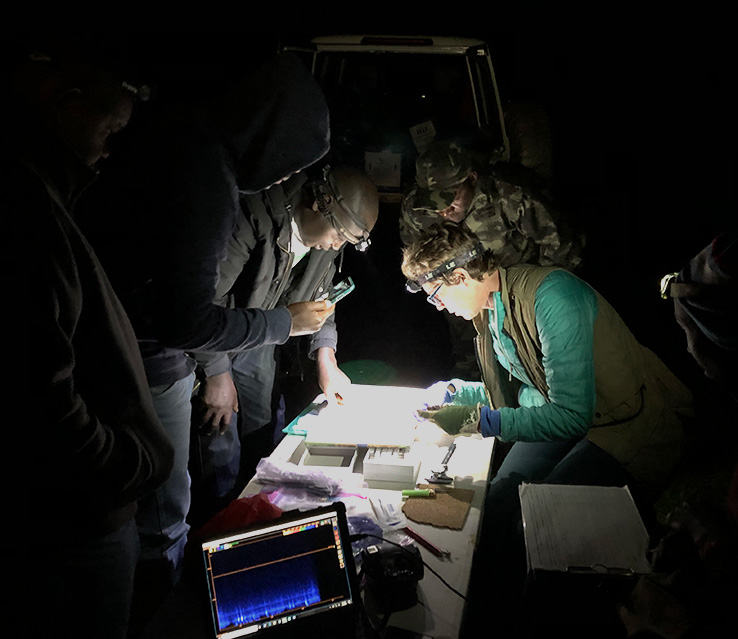 Sizing up a ghost

The team carefully measured the bat before releasing it back into the wild, which provided an early signal that they had seen the lost species they came to find. Dr. Flanders then traveled to visit museum archives in Europe to compare the only known specimens to verify that they had located the first evidence in 40 years that Hill’s horseshoe bat, in fact, still exists.

The team also gathered additional information ensuring that it will be easier to detect this elusive species in the future, having made the first-ever audio recordings of the echolocation calls that R. hilli emits as it hunts for insects.

“Knowing the echolocation calls for this species is a game changer," said Dr. Paul Webala, Senior Lecturer at Maasai Mara University and one of the team’s lead scientists. Since catching and releasing the pair of Hill’s horseshoe bats, the Nyungwe Park Rangers have been setting out detectors to eavesdrop on the bats during their nightly flights through the forest.

The rangers conducted audio surveys with Wildlife Acoustics bat detectors in 23 locations over nine months, logging a quarter million sound files. Audio analysis identified R. hilli at eight locations, each within a small area. “All the work so far confirms that this is a very rare species with a very small core range. We look forward to collaborating with the Rwanda Development Board and Nyungwe Management Company to strengthen the existing conservation efforts to ensure it stays protected,” said Dr. Frick.

Careful planning and strong partnership support between all the agencies, organizations and experts involved in this initiative were key to its success, according to Dr. Olivier Nsengimana, RWCA founder and executive director.

“Nyungwe National Park is one of the most biologically important montane rainforests in Central Africa, supporting an exceptional range of biodiversity including many rare and endemic species, including bats,” said Eugene Mutangana, conservation management expert at the RDB. “These findings reinforce the importance of both Rwanda’s committed stewardship of Nyungwe National Park as a global biodiversity hotspot and our conservation and species management actions."

RWCA is a Rwandan non-profit organization dedicated to providing sustainable solutions to critical wildlife conservation issues in Rwanda and the East African region using a holistic and multi-disciplinary ‘One Health Approach.’

About Rwanda Development Board

RDB is the public institution, among others, mandated with the management of national parks and tourism in Rwanda, and has the formidable charge of conservation and management for wildlife in national parks including endangered species and their habitats. VisitRwanda.com